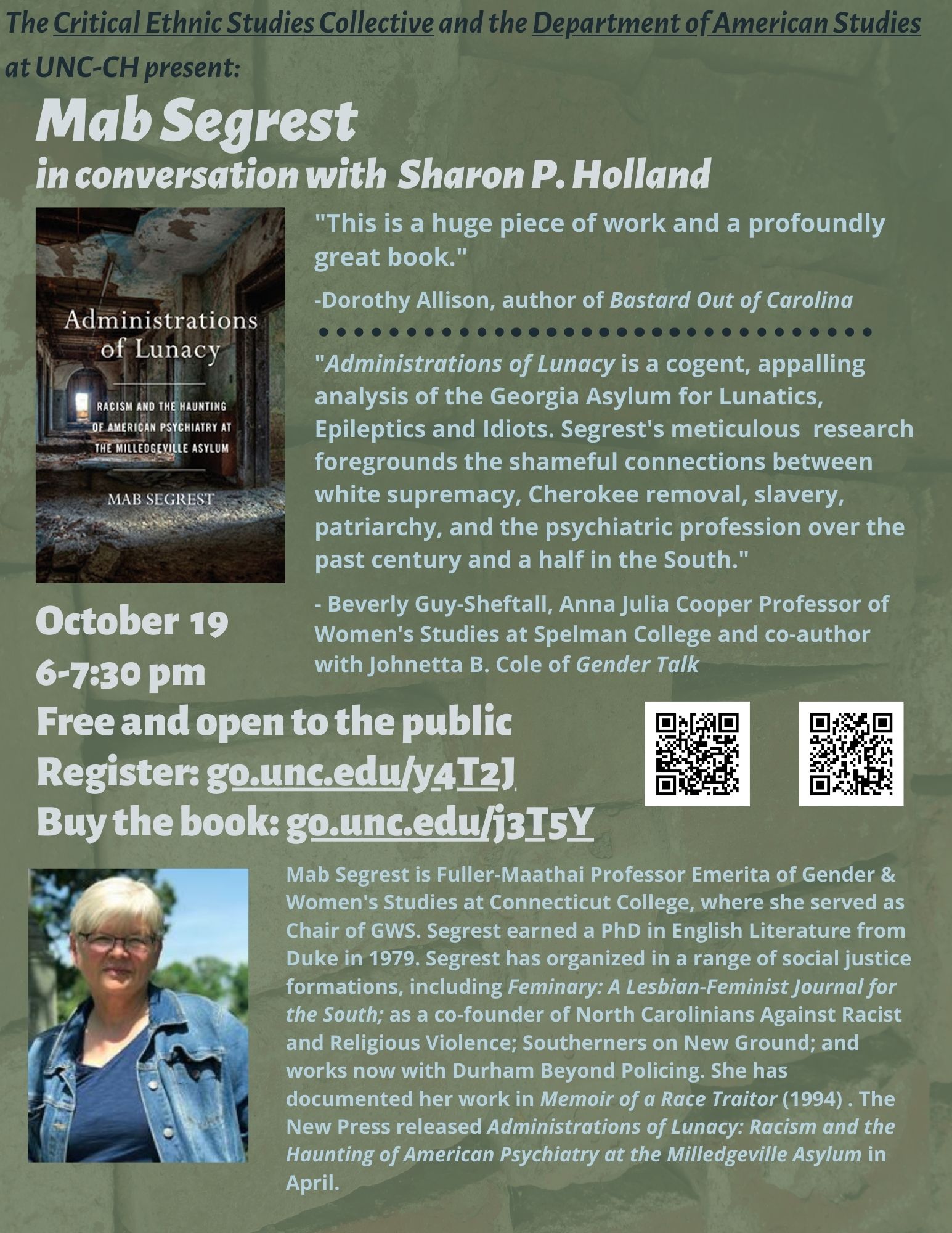 Join Mab Segrest and Sharon P. Holland as they discuss Dr. Segrest’s new book, Administrations of Lunacy: Racism and the Haunting of American Psychiatry at the Milledgeville Asylum (The New Press; 2020). Registration with an email address is required to attend the Zoom Webinar.

Register for the talk

“In a gripping narrative,” writes Glenda Gilmore, C. Vann Woodward Professor of History at Yale, “Segrest retells southern history through the experiences of patients committed to the Georgia State Lunatic, Idiot and Epileptic Asylum.” It is, to Gilmore’s way of thinking, an “astonishing and compelling feat” that gives voice to the 25,000 unclaimed bodies that lie in unmarked graves around the institution’s grounds.  Turning away from memoir to the depths and expanses of historical archives, Segrest takes on an epic story and brings it home.

Today, 90 percent of psychiatric beds in the United States are located in jails and prisons, institutions that confine disproportionate numbers of African Americans. After more than a decade of research, Mab Segrest locates the deep historical roots of this startling fact, turning her sights on a long-forgotten cauldron of racial ideology:  the state mental asylum system in which psychiatry was born and whose influences extend into our troubled present.

In December 1842, The Georgia State Lunatic, Idiot and Epileptic Asylum was opened on land stolen from the Muscogees in a building paid for by state profits from that theft.  For the first quarter of a century, its patients were the white settlers whose psyches were shaped by these wars of displacement and the inherent violence of plantation slavery.  After Emancipation, counties sent African Americans into a growing psychiatric fiefdom brutally segregated by race with its modern diagnostic categories blaming the people that Jim Crow most harmed and also marginalizing women, sexual outcasts, and the white poor.

Over a hundred years later, it had become the largest insane asylum in the world with over ten thousand patients, considered by psychiatric historians as “American asylum psychiatry writ large.”  Administrations of Lunacy tells the story of this iconic and infamous southern institution, a history that was all but erased from popular memory and within the psychiatric profession. Its revelations are, by turns, infuriating, tender, funny, scathing – and always surprising.