Skip to main content
Home / Our Board / Malinda Maynor Lowery 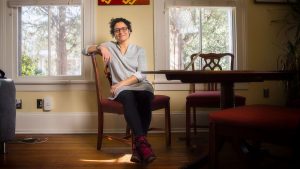 Director, Center for the Study of the American South

Malinda Maynor Lowery is a historian and documentary film producer who is a member of the Lumbee Tribe of North Carolina. She is a Professor of History at UNC-Chapel Hill and Director of the Center for the Study of the American South. Her second book, The Lumbee Indians: An American Struggle, was published by UNC Press in 2018. The book is a survey of Lumbee history from the eighteenth century to the present, written for a general audience. Her first book, Lumbee Indians in the Jim Crow South: Race, Identity, and the Making of a Nation (UNC Press, 2010). It won several awards, including Best First Book of 2010 in Native American and Indigenous Studies. She has written over twenty book chapters or articles, on topics including American Indian migration and identity, school desegregation, federal recognition, religious music, and foodways, and has published essays in The New York Times, Oxford American, The North Star, The Conversation, Daily Yonder, and Scalawag Magazine. She has won fellowships and grants from the Mellon Foundation, the National Endowment for the Humanities, the Sundance Institute, the Ford Foundation, and others. Films she has produced include the Peabody Award-winning A Chef’s Life (PBS, 2013-2018), the Emmy-nominated Private Violence (broadcast on HBO in 2014), In the Light of Reverence (broadcast on PBS in 2001), and two short films, Real Indian (1996), and Sounds of Faith (1997), both of which premiered at the Sundance Film Festival.