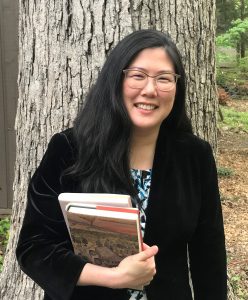 Heidi Kim is a professor in the Department of English and Comparative Literature. Her research ranges through nineteenth and twentieth-century American literature and Asian American studies. Illegal Immigrants/Model Minorities: The Cold War of Chinese American Literature, forthcoming from Temple University Press, sheds new light on the writing of and about Chinese Americans, who were dogged by the stigma of illegal immigration and paranoia about Communist infiltration. Her first monograph Invisible Subjects: Asian Americans in Postwar Literature (Oxford UP, 2016) resituates the work of Ralph Ellison, William Faulkner, John Steinbeck, and the Melville Revival critics through recent advances in Asian American studies and historiography.

She also researches and speaks extensively on the literature and history of the Japanese American incarceration, including Taken from the Paradise Isle (UP Colorado, 2015), which won a Ka Palapala Po’okela Award from the Hawaiian Book Publishers Association. She enjoys partnering with community and academic organizations on this topic, including Out of the Desert at Yale University and Densho: The Japanese American Legacy Project.

Prof. Kim received her undergraduate degree in Biochemical Sciences from Harvard University and her Ph.D. in English from Northwestern University, with a brief management consulting stint in between. (“It’s a long story,” she says.) She has been a Tar Heel since 2010 and lives in Chapel Hill with her husband, young daughter, and a large black cat.